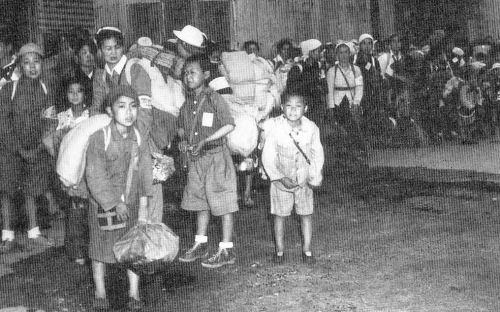 For more than a year after the war’s end, 13-year-old Susumu Noda awaited a ship that would take him away from his hometown of the Japanese colonial port of Dalian, Manchuria, and to a country he knew little of, Japan. The experience climaxed in an event that left a lasting impression on the youngster, when the repatriated colonists beat a man nearly to death.

When the time came for the start of our repatriation, in December 1946, we were all assembled in this refugee camp. There they had a luggage inspection. The person who is in charge, the Japanese head of our collective was issuing orders.

He did said your entire group is only allowed to take no more than ¥100 million (in today’s money).

As for our personal belongings, we were allowed one backpack each. Mothers made them for their children, sewed them. In them, we’d put a change of underwear and so on. We were there in the camp waiting for about a week. If you had anything good in your bag, the Russian soldiers would take it.

We weren’t allowed to take any money with us, but still, everyone held onto the money until the very last minute. We wanted to take more. They said that we would be unable to exchange more.

At the camp latrine, there became a mountain of ripped-up money.

When we boarded our ship, we found out from the crew, who were Japanese, that we would be able to exchange all the money we had when we got back. So we thought that was pretty strange since the labor collective guy had been telling us different.

As it happened, that guy, the labor collective boss was on the same ship with us. He was the one who told us we couldn’t. What had that guy been doing? So that evening we went looking for him, but we couldn’t find him. We looked all over for him. He was hiding in the captain’s cabin.

We wanted to throw him overboard and let him swim back to Japan. But the captain, who at sea is in essence a public prosecutor, said that would be murder. Then we thought we’d tie him up and soak him in water, because it was really cold. It was February. But the captain wouldn’t permit it.

In the end, we bound him to a mast with rope in just his fundoshi loin cloth and we struck him over and over, shouting at him, “You bastard!” Finally, the captain said, “That’s enough.”

In reality, we were like a lynch mob. It was just horrible. Another ship arrived In Sasebo before us. They and knew that the labor collective guy was coming on our ship and they were there waiting in the camp they had there.

Some of them were waiting for him when we arrived. They had bamboo poles ready… I guess to kill him with but…